Are You Training Your Core Slings? (Part 1)

We as humans learn to train movement patterns, such as pushing, pulling, squatting, hinging, and carrying, all of which are then modified to our specific needs and address deficiencies that could lead to injuries down the road. We do these movements, combined with some conditioning and mobility work so that we can feel stronger and more confident as we take on other tasks in our day-whether that be throwing a baseball, running, mowing the lawn, or helping a friend move. What if I told you there is one thing that, once you understand its role in the human body and how to develop it, can help you make massive improvements in your performance in life?

The body acts as a yin and yang to produce all sorts of motions. For example, when we contract a muscle, while the agonist (main mover) muscle creates an action (think doing a bicep curl), there is an antagonist muscle on the opposite side of the lever that stretches in order to allow the agonist to contract. In this case, the tricep on the posterior side of the arm stretches as the bicep flexes while you show off in the mirror at home. We can take this idea of opposing muscle groups and expand it for bigger movement patterns. During athletic movements, such as sprinting or throwing a ball, reciprocal muscle groups on contralateral (opposite) sides of the body allow force to be transmitted through the core from one side of the body to the other. Take running, for example. When we run, one hip is moving into hip flexion while the opposite side is simultaneously moving into hip extension. Similarly, as you raise your arm on one side you extend the other arm behind you to propel forward. The stabilization that is needed to make these movements fluid and efficient goes overlooked, and dysfunction can lead to slow race times or injury. You may not have known it before, but you have slings of muscles and fascia in the body that operate in symphony to allow you to sprint, run, walk, hit a volleyball, or throw a football. Imagine a highway of muscles and fascia that you can track from your hips all the way to your shoulders in a rotational and wrap-like pathway that act to keep your hips and core working in symphony.

The oblique slings are a series of muscles in the body that are responsible for transferring force across many joints-mainly from the upper torso to the lower body and vice versa-as these forces pass through the core. They act as a sort of whip in order to not only transfer force throughout the body but also provide stability across multiple joints as we create rotational movements. In this article, we are going to focus on two sling systems-the anterior and posterior oblique systems-as I work to explain what they are, how they work, and how you can use this knowledge to better challenge and train your oblique slings for improved performance and low back durability.

All muscles and sling systems work to some extent during any human movement (i.e. as prime movers or as synergists), and the type of motion being performed can determine whether we are relying more on the posterior or anterior oblique sling. The posterior oblique sling consists of the latissimus dorsi muscle and the opposite side gluteus maximus muscle, both of which are connected via the thoracolumbar fascia. Being able to stabilize through the core, as these contralateral muscles contract simultaneously, gives rise to increased power and speed. Take a sprinter, for example. As he or she races down the track, the gluteus maximus muscle fires to extend the hip backward, creating force into the ground and propelling them forward. At the same time, the opposite side arm is extended behind them thanks in part to the latissimus dorsi muscle. The fastest runner is the one that can put as much force into the ground the quickest, while also cycling through flexion and extension of their arms as they dynamically stabilize their trunk. Training the posterior oblique sling in a progressive fashion can be a great approach to enhancing performance and limiting dysfunction that could lead to poor results or possible injury. 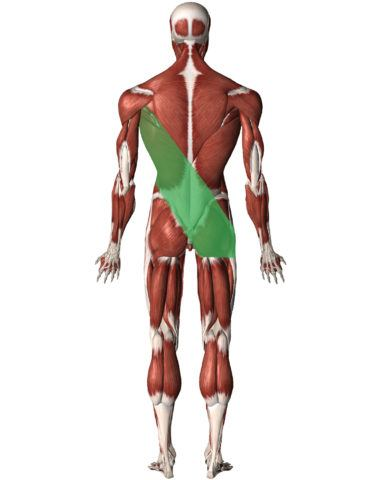 While the posterior oblique sling functions, the anterior oblique sling is also doing its job to provide proximal stability so that force can be applied to various movements in the extremities. The anterior sling consists of the serratus anterior muscle and external obliques on one side, as well as the internal obliques and adductor complex on the opposite side, all of which are connected via the adductor abdominal fascia. The anterior oblique system assists in accelerating and decelerating the body during sport-like movements, such as when a pitcher throws a baseball. As the thrower strides forward towards home plate, the arm holding the ball comes forward and across the body as they release the baseball. Meanwhile, the contralateral oblique stabilizes the core from over-rotation, and the adductor muscles stabilize the lower body as they stand on a single leg. While the pitcher accelerates down the mound, both the upper and lower extremity muscles of the anterior oblique sling contract to stabilize the core and allow for the extremities to produce the whip-like action of throwing the ball. 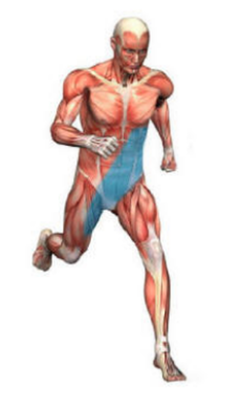 Ultimately, all movement patterns and muscles must be considered when creating a well-rounded training program, but for the sake of this article, we will focus on exercises that center on the anterior and posterior oblique slings. Special attention must be given to movements that center around stability with rotation in different planes, as these particular systems have a heavy role in providing stability to gait, such as during acceleration, deceleration, and change of direction, as well as during throwing actions. Try out the following four exercises and watch your performance improve tremendously!

The Band Low Split-Stance Pallof Press with Knee RNT can be seen as a total body exercise, but there is an increased need to resist movement in the back, hips, and core while the upper limbs move. For that reason, it is an excellent exercise that targets the anterior oblique sling muscles, such as the external and internal oblique muscles which work to resist rotation, as well as the adductors which provide stability as you stand in a low lunge position. In order to do the exercise correctly:

This exercise can be used as a part of a warm-up or as a part of a pairing of exercises during the workout; aim for 2-4 sets of 8-10 presses each with resistance coming from both the left and right sides, pausing for one second each with the band pressed out in front of you.

The Band Lateral Squat with Pallof Press is another great exercise to target the anterior oblique sling. We are still emphasizing the same movement pattern of the upper body as in the previous exercise, but this time the lower body is moving side to side in the frontal plane. Therefore, the adductors will be tasked with working more in a dynamic fashion, lengthening and shortening in order to create movement. To perform this exercise correctly:

As with the last exercise, this can be used either as a warm-up drill or as a part of the strength portion of the workout. Perform 2-4 sets of 8-10 repetitions on both sides.

The Cable Split Squat with Straight 1-Arm Pull Down is an exercise that is going to target the posterior oblique sling. It will target the glutes and latissimus dorsi muscle, along with the lower back, core, and lower extremity muscles to a smaller extent. Also, it will challenge your stability and balance as you stand in a split squat position. In order to execute this exercise:

This exercise is a fantastic way to connect both the upper and lower halves of the body as you warm up, or it can be used as a pairing with another exercise during the weight lifting portion of the workout. Aim for 2-4 sets of 8-10 repetitions per side.

Lastly, the Cable Mid-180 1-Arm Press with Hand-Off is a dynamic exercise that will test all facets of your fitness. This movement will target both the anterior and posterior oblique sling, making for a great total body exercise. In addition, this can be a great addition to working on your balance. In order to do this exercise properly:

This movement will be challenging, as it works on your balance, strength, and overall athleticism. It can be added to your warm-up or workout as a great addition to your plan. Begin with light resistance and aim for 2-4 sets of 8-10 repetitions per side.

Stay tuned for Part 2 of this series where I introduce two additional anatomy slings and share exercises that help to tap into them. 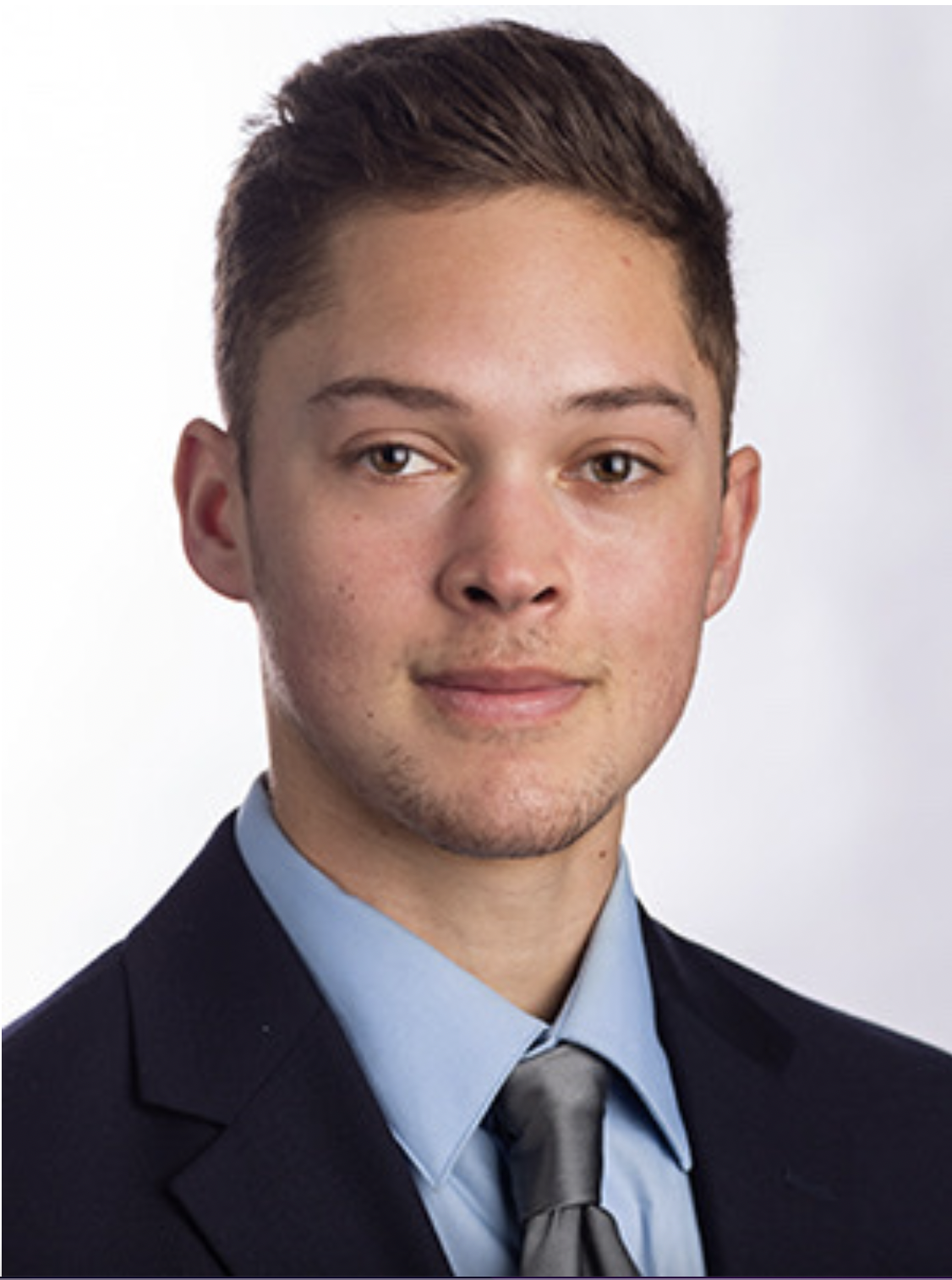 Elijah Harris is a certified athletic trainer (ATC) and former intern at TD Athletes Edge. He recently completed a B.S. in Athletic Training at Endicott College in Beverly, Massachusetts. While in college, Elijah played for the men’s ice hockey team and men’s tennis team. Elijah enjoys sports of all kinds and plans on going back to school to earn his Doctorate in Physical Therapy.